Coverage update! The BooLander gets a sweet write up in Bicycle Times Magazine

and a beautiful video from KQED Arts:

What’s up bicycle customizers, feast your eyes on the BooLander, the latest custom bike to hit the streets at Rock The Bike. 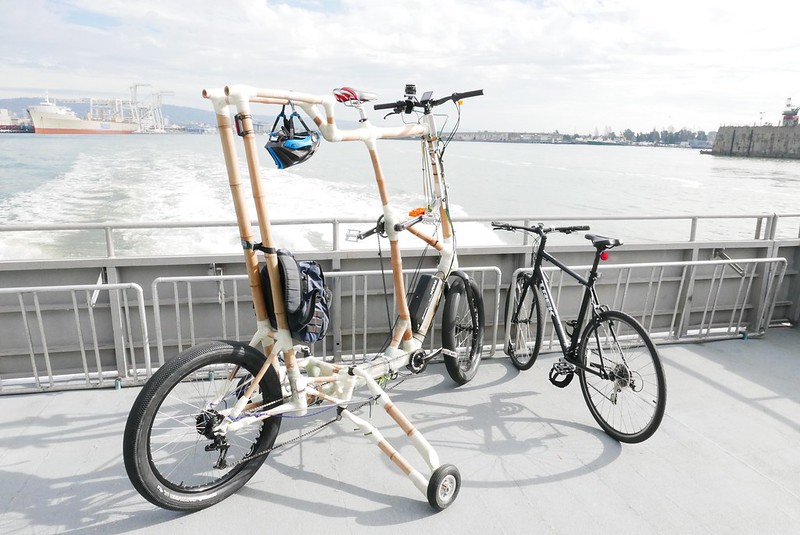 The BooLander is a vertical tandem (riders are top / bottom versus the more common front / back arrangement) with optional swing-out ‘landers’ or ‘roots’, that stabilize the rig when mounting, dismounting, starting, and stopping. 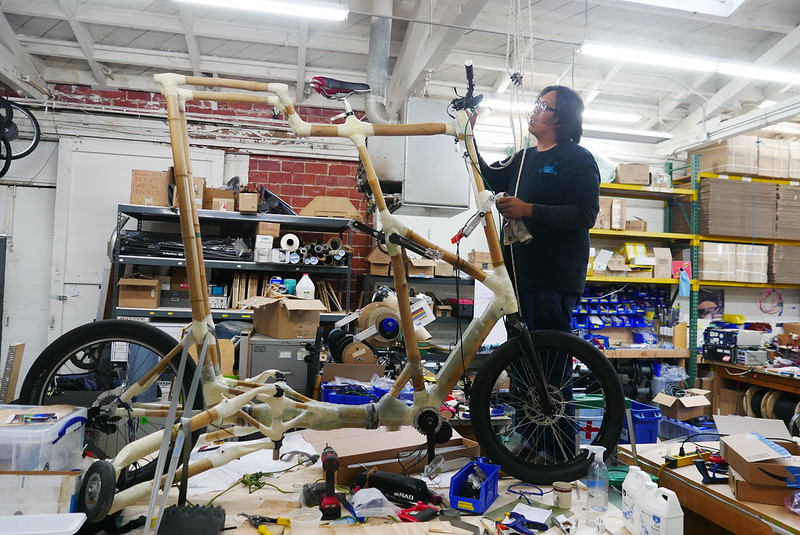 Above, Ariel, the tallest person at Rock The Bike, bleeds the hydraulic disc brakes on the 5 x 8′ work table.

Despite its size, the BooLander is easy to ride. The helper wheels at the ends of the Landers are noteably different from training wheels in that they are optional. The captain deploys them when slowing to a stop by stomping on the orange pedal mounted to the head tube, and releases them with a thumb button that collapses the knee joint holding tension on the primary rope. 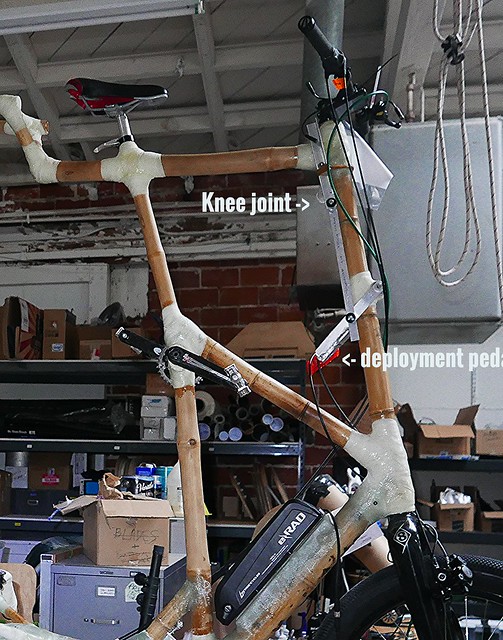 Riding on 2 wheels is far faster and more natural, but having the landers is critical for safe stops and starts. The landers result in a far safer tall-biking experience versus the more common running starts necessary to mount most tall bikes, and in a tall bike that is far easier to learn. 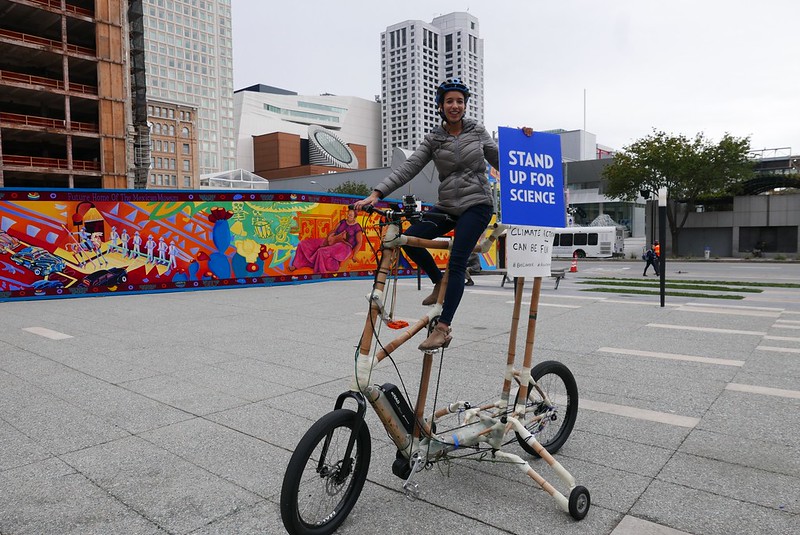 A brave participant at a SF Climate Rally picked up the Lander system on the BooLander on the first try.

The BooLander features a touring-grade mid-drive eRad electric motor system. The range on a full charge is 40-60 miles depending on terrain and the riders’ strength. Charging requires wall power but could theoretically be done off the grid with a solar panel.

The frame includes a rugged rear carrying rack (not shown in photos on this page) and 2 integrated passenger seats (1 behind the captain’s seat). The upper passenger seat allows the stoker to climb up while riding and enjoy well-earned views during long descents. 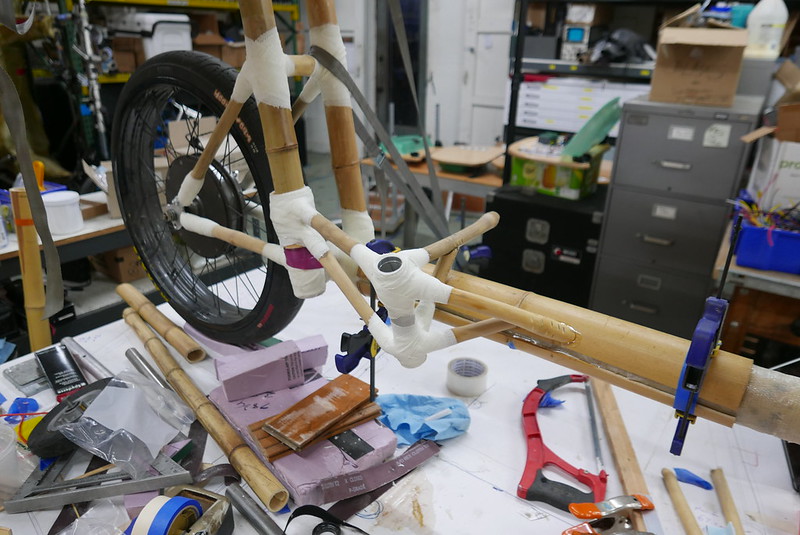 Above: space-frame engineering and fabrication progress on the lander pivots. Note the split sleeve clamped around the long ‘boom tube’. This is part of the unique break apart design. See lots more pictures in the BooLander set on Flickr.

The frame splits apart into 3 sections for AMTRAK-assisted bike tours: front, rear, and roots / seat. Approximately 1 hour is required to undo a series of hose clamps and hardware to separate and pack the bike. Once accomplished, it can be loaded as 2 bikes into long-distance AMTRAK trains and busses, enabling tours in and out of the Grand Canyon, Glacier National Park, Chicago, Los Angeles, Portland, and beyond. 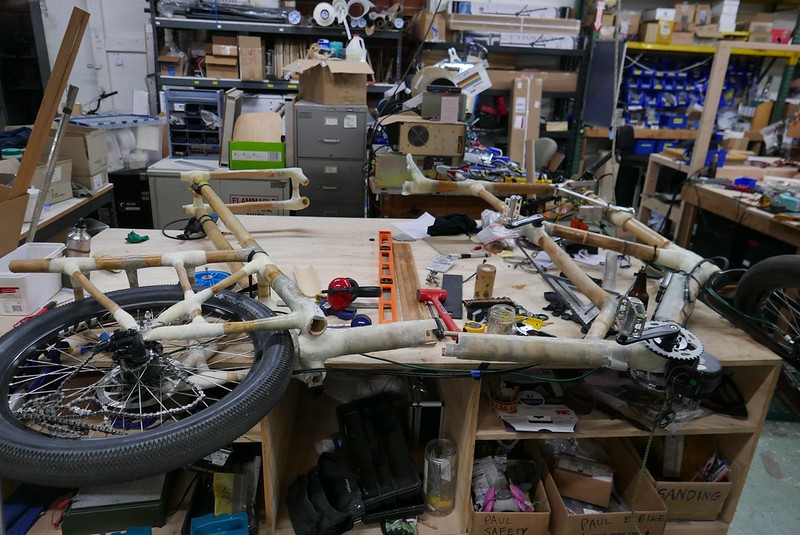 Front and back frames go into separate boxes.

The first of these out of town tours will be a supported 5 day Climate Ride in Death Valley. Between now and then I’ll be raising funds to meet the rigorous target of $2800/rider for Climate causes. The hardest part might just be getting the BooLander to Las Vegas without a truck. My current plan is to use an AMTRAK train/bus combo.

My motivation for joining a Climate Ride is similar to my motivation for building the bike. I’m trying to educate myself on climate issues and improve my abilities in one-on-one Climate Activism, while at the same time having epic adventures. The point of this is to engage interested people one on one, starting with a fun ice-breaker like the kinds of pedal powered activities that we make at Rock The Bike, or like an amazing custom bike they can learn to ride on the spot. My theory is that once someone is in an open-hearted state of wonder, they are more likely to engage with a big problem like Climate Change. 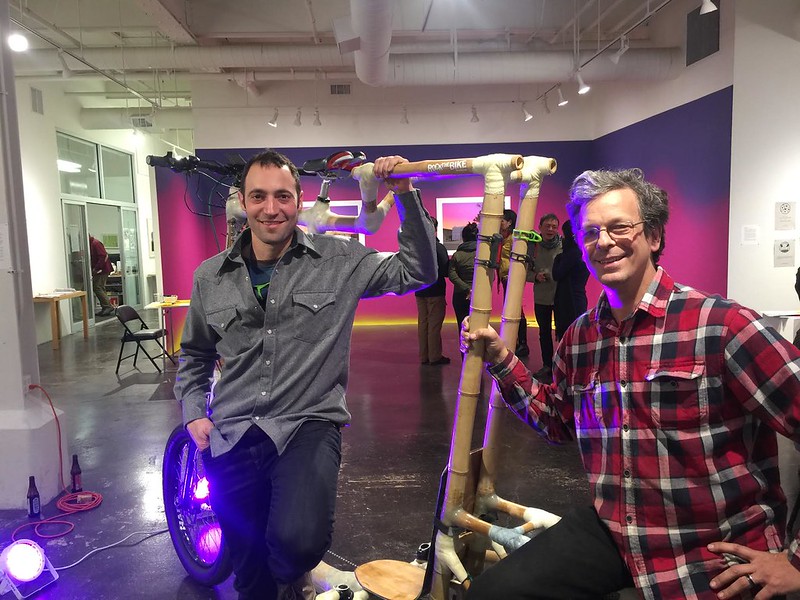 Above: my ‘bamburu’ Craig Calfee and I at the Print Public gallery opening at Kala in Berkeley. 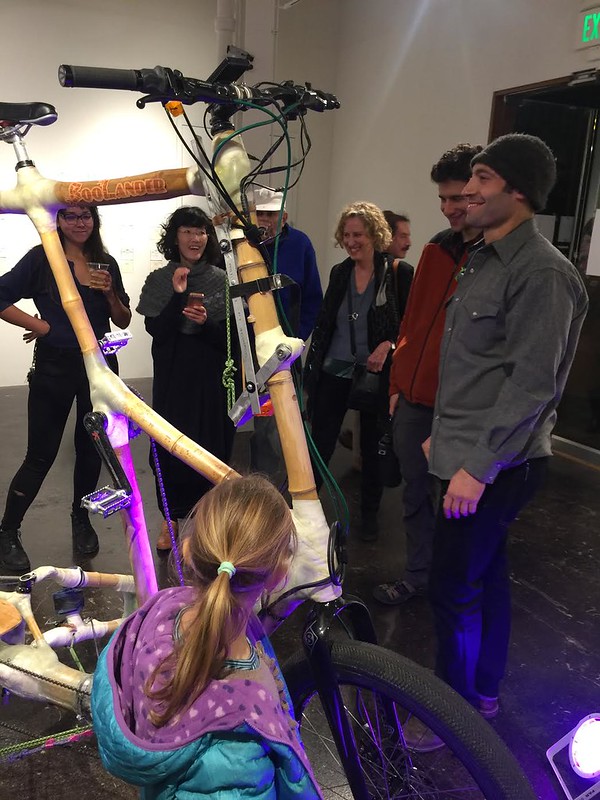 Showing the BooLander bike at the Kala Art Gallery

I’ve noticed that my custom bikes bring a lot of joy; now is the time to move these interactions to the next step, helping people become personally engaged in climate activism and seeing that “climate action can be fun”.

One on one connection is what led me into the field of cargo biking and pedal power. I was fortunate to be an early crewmember and friend to the founders of Xtracycle. It was the experience of being invited on their bus tours, social rides, and overnight bike camping trips, and shown how to use the straps and buckles, and shown how using less fuel could go hand in hand with having more joy, that gave me the juice to start Rock The Bike. 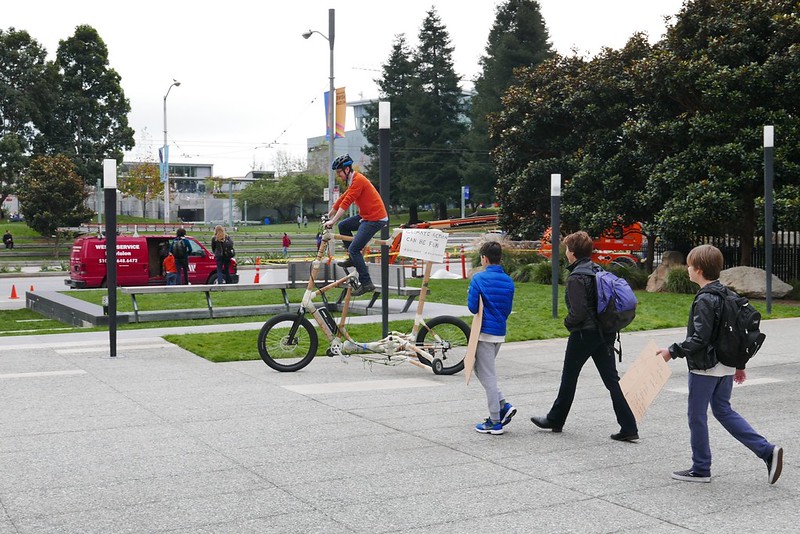 Above: giving rides after the recent “Stand Up for Science” Climate Rally in San Francisco. Rider after rider got the technique of the BooLander’s outriggers safely on their first attempt. 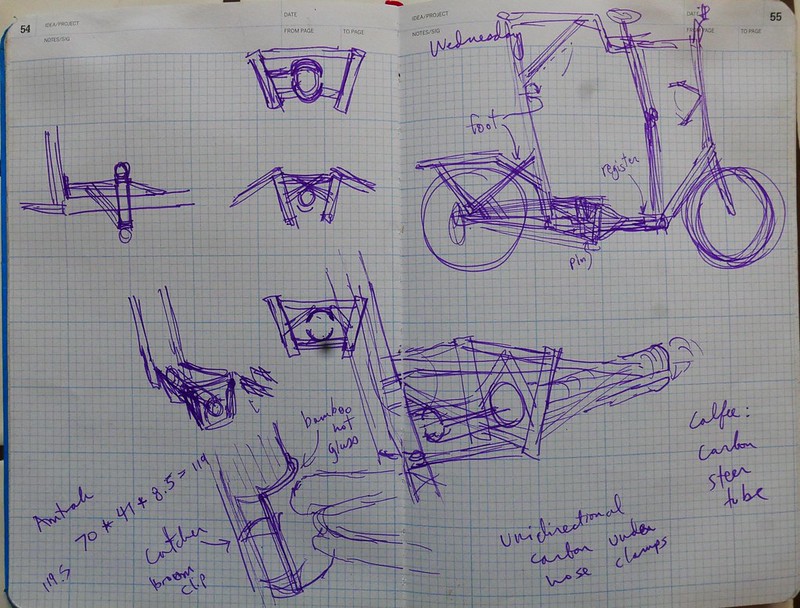 The frame of the BooLander was engineered and designed without the use of CAD software. The design process took approximately 1 year of active attention, followed by approximately 3 months of active, but not full-time building.

Although vertical tandems are rare, they are not new. Similar bikes were used in government service in Chicago during the early 1900’s, by lamplighters: